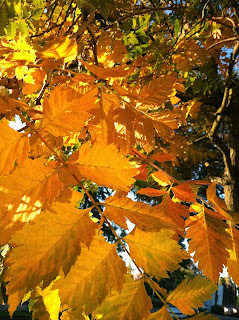 The fall season in Portland is simply magical. Perhaps I never took the time to notice the specific beauty that fall brings. Then again, maybe it’s global warming working it’s charm. I choose, however, to focus on the cool air, beaming sun rays, and crystal clear skies of these unusual days. It’s also been a much welcomed and calming transition from the summer months for me in many ways. Now is the time of year where opportunities for rest, relaxation, and all the cozy things of fall are sought out.

One of those opportunities came to me recently as a friend and I relished in a day of nourishing the feminine within. A much needed hour soak at the Common Grounds Wellness Center. During the drive back home our eyes were brought to the sight of a large apple shaped balloon in the distance. I should say it was good marketing, since we spontaneously took a pit stop at the Portland Nursery’s seasonal apple festival. What a good time we had participating in all the fall festivities while tapping into our inner child beckoning to come out and play.

I gathered a number of delicious apples and pears. Once I got home and started unloading my bag, I came across a luscious bright green apple. I already forgot the name of what type it was, but it didn’t matter. It was gorgeous. In reverence for this gift from Mother Earth, I decided to place it on my meditation altar. Perhaps the nourishing green energy emanating from it would bring me some financial prosperity. It wasn’t long before I realized I had been meditating in front of this apple for almost a week. Then I thought, “Wow! This apple has got to have some good vibes! I’m going to keep meditating and see what happens.” These thoughts occurred in a subtle way yet frequently enough to bring my awareness to what was really going on. Instead of fighting this resistance to my ego, I indulged a little and pondered the benefits of meditating in front of this delectable fruit. Oh what benefits I would reap in the end of this experiment! It was quite a humorous internal dialogue.

A week passed and it was finally time to taste the richness of the apple. After all, I didn’t want it to sit there too long or else it would go bad. The color by this time seemed a little brighter and even more appetizing. I cut the apple into slices and put them delicately on a small plate. What would it taste like? Would it be even sweeter, fulfilling, and nourishing than I expected? I placed the apple in my mouth and chewed very consciously to take objective notice of the taste, as if I had any recall of what it tasted like before I took my first bite.

In one sweet moment of I felt the true essence of this apple. The taste of the surprisingly sour juice on my lips caused my mouth to salivate even more. By the time the second half of the apple got to my mouth, I was feeling the beginnings of satisfaction and fullness. At the same time, I didn’t think too much of what was going on, allowing the moment to pass with each bite. It really wasn’t a big deal at all. For in the end it was simply and perfectly an apple. It didn’t try to be delicious, grand, or delightfully satisfying. The apple didn’t indulge in my perceived views of it nor cared to fit those expectations or ideologies. I’m sure if it could think, it wouldn’t bother questioning it’s purpose as it ripened from the tree branch and fell to the ground. It was what it was. It was an Apple and was probably just fine with being that. This apple was already whole and complete in itself.

Until I bit into it.

Please enter your name and email address to receive information on upcoming events and workshops, including special offers.